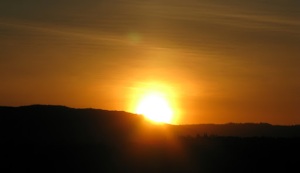 My last post must have been more accurate than I thought. I can always count on the Nameless to react to my actions that threaten the paradigm they depend on to maintain this grand delusion. Now that I am inspired by, and connected to, source consciousness my journey is taking me away from anything that might be an obstacle to my ascension in its many forms.

A Mental and Physical Workout

The day was a good day, just as I intended. I have been humming along guided by an undercurrent of well-being. It is becoming easier to connect to it. A couple days ago I was overcome with the fact that I am truly fearless. It was a new aspect of my new state of well-being. Everything I did had an air of confidence. I did not concern myself with worry about anything. I found myself living in the moment and within the moment everything was beautiful.

The day was beautiful. A bright sun and crystal clear skies were joined by a windy chill. I could not wait for a chance to go for a bike ride. Late in the day I gathered my gear and set off my ride and a chance to capture some pictures of the setting sun. I exited the house and rolled down the street. I saw the one of the Nameless minions (half-bred hybrids of the Nameless and their brood) that lives at the corner walking out with his cell phone in hand. I did not care, I just hummed along my way.

I am aware that all I see is there for me, nothing is a coincidence. This is my dream unfolding before me, co-creation with source consciousness. I pay attention and make adjustments, nothing is taken for granted. I  connected to the hum of source consciousness, set my sights on a wonderful ride and put the minion out of my mind.

I rode along the back roads I had not been on in a while. I saw the new homes and neighborhoods that have been built where there used to be nothing but pasture and open space. I was enjoying the ride and the accompanying feeling of well-being. I had traveled about 10 miles, I could have gone further, I wanted to,  but the sun was about to set. I turned around to head back home and started to look for high ground to take in the setting sun.

I turned into one of the new neighborhoods and climbed to the top of a hill. I watched the sun set and took pictures at different intervals. Soon after the sun set I rode down the hill and headed back home. I started to notice that I was starting to worry. One thought lead to another and soon my mood went into a downward spiral toward fear and frustration. It felt as if something was dragging me from my connection to source consciousness, kicking and screaming. I fought back and began to focus on the moment and more positive emotions. I was locked in a battle to rid myself of the negativity that suddenly came on with my own style of mental kung fu.

The sun continued to drop behind the mountain and the bright orange yellow sky was being consumed by darkness. I was still battling the negativity, punching and kicking them back and replacing them with a sense of accomplishment and joy. and suddenly it stopped. It was like a light switch being turned on eliminating the darkness within me. I suddenly remembered that I had this experience before. When I was locked in a daily battle with the Nameless while living in Hawaii, the time during sunset was particularly difficult. I was always overcome with negativity during that time of day. I began to realize that the negativity was coming from someplace outside of me. Once I realized this, I was able to fight it off. Living in an apartment surrounded by the Nameless made me an easy target. Now it is more difficult for them. Now they have to hit a moving target.

A big grin filled my face and washed over the rest of my body and spirit. The feeling of well-being was back. I was grateful and I noticed how much I missed feeling it for those 20-30 minutes of negativity. That auspicious time during the change from light to darkness was being used again to try and separate me from my growing connection to source consciousness. Wow, I won that battle. The fearlessness of the moment returned to me. I could feel the hum of source consciousness again. Did they accomplish what they set out to do? Did they occupy my thoughts so that I could not focus on well-being during that auspicious slice of time?

I rode past the corner house where the minion lives and I looked toward the front door. There he was, standing on the front step shrouded in darkness. I could see his pudgy silhouette detailed with the same clothes he had when I left on my ride. I smiled and thought to myself “nice try”.

I remember that a car rode past me with the window down a few days ago. The passenger had an iPhone in his hands. I could see he was looking at an image. He then started to close the window as they drove past. I wondered if he took a picture of me as many people seem to do from time to time. I wonder if the Nameless use those images to help them focus their negative thoughts on me. This technique is often used to aid in meditating when someone is attempting to help heal another. I never thought it could be used to harm another person. I guess there may be something to the psychic soldiers as portrayed in the movie “The Men Who Stare at Goats“. I now know they can reach me from any distance so it is important for me to pay close attention to my emotions at all times.

The Litany Against Fear
I must not fear. Fear is the mind-killer.
Fear is the little-death that brings total obliteration.
I will face my fear.
I will permit it to pass over me and through me.
And when it has gone past I will turn the inner eye to see its path.
Where the fear has gone there will be nothing.
Only I will remain.
Bene Gesserit – Dune by Frank Herbert

I still don’t hate them for what they do. Hatred has no place in my life. I know it is the nature of the beast, they just can’t help themselves.

I am grateful for all those known and unknown allies that have helped me to gain my current level of being. I can finally begin to see my life unfold in a grand new direction. I am unable to express my appreciation for your help, but if you look within me you will know how I feel. Even though I am having to take this journey, I have a greater appreciation for what I have accomplished.

I am just a normal person having an abnormal experience. Am I crazy? Yes, of course I am crazy. Anyone that seeks to understand and master consciousness has to be insane. Sanity is a characteristic of the average being that accepts what they experience as reality. Insanity is a necessity when attempting to navigate the illusion of this conscious reality. There are no limits placed upon humankind, just the ones we place upon ourselves. View all posts by 3maxxxam3

The Prevention of Ascension Vol. I

If you would like to support this site and my efforts please buy as many copies as you like. I receive a small percentage of the book sale.