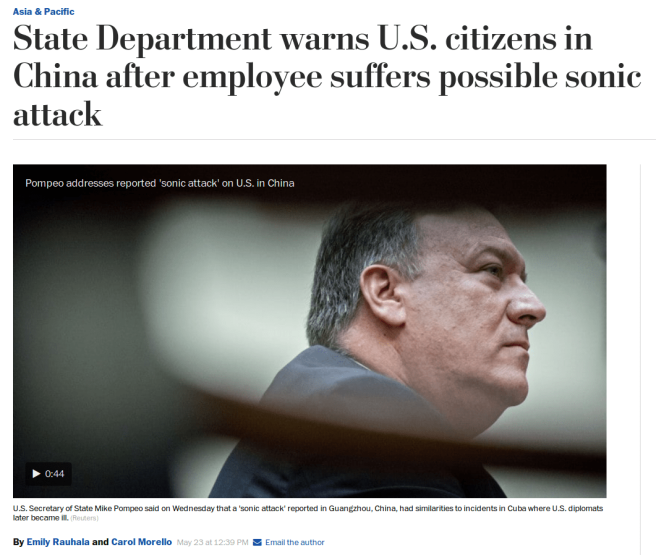 This is now the second mainstream media report of a sonic or electromagnetic weapon used on an American federal employee. A previous article I posted on here (Sounds Familiar) referenced a CNN report on the attacks in Cuba. The latest information of Cuban attacks have proven that the victims suffered permanent brain injuries. Because of the covert nature of the attacks I cannot be completely certain that it was an attack similar to what targeted individuals have been reporting, but it does sound similar.

What is of interest to me is that I have recently discovered that there are two distinct types of attacks. One is of an electronic origin and the other is, for the lack of an appropriate term, of a psychic and/or dimensional origin. Since I have experienced both types of attacks over eleven years, or more, I am better able to differentiate between the two. The electronic variety is more powerful and somewhat indiscriminate. The psychic variety targets a specific body part of the victim (heart, liver, spleen, feet, teeth…).

My intuition tells me that the weapons are being used far more frequently than what is reported in the media. A few American diplomats may be just a small portion of the victims that are targeted daily. I speculate that many people suffer from EM weapon attacks unknowingly. I have experienced daily attacks and I compare it to the analogy of the frog in the pot. Daily attacks interfere with biological processes that affect long-term health and wellbeing. The attacks are not deployed for short-term effects, but are deployed to cause detrimental health and cognitive decline over time. Most victims are unaware that they are a victim until it is too late. The victim will go to the hospital for care and that may not be the best course of action since hospitals seemed to be saturated with people I regard as “the others”, my antagonists.

Most electronic weapons I have encountered were vehicle mounted, but I have encountered an attack from a person holding a cell phone (cell phones are radio transmitters) while standing a foot behind me. Psychic attacks may or may not have physical limitations and source detection is impossible. Part of me wants this to be revealed and the other part is concerned about the reaction of the population to this undetectable threat. We will have to wait and see.

I came across this video from a Targeted Individual Facebook group. Most of the attacks I describe on this site and in my ebook are mentioned in this video. There seems to be a lot of people being experimented on and controlled with weapons and a means of influencing the thoughts of people with microwave technology.

The above video has offered proof that what I have been experiencing is not a result of my lack of sanity. What I have endured and still endure is a real effort to silence what I have discovered. Even though I remained silent for a bout a year the microwave electromagnetic radiation did not. During that year, I continued to experiment with methods to increase my bioelectric and spiritual energy and they ensured that anything I did to raise my energy levels they countered with these weapons.

For me there is still unanswered questions I have concerning those I refer to as the Nameless. They seem to be at the center of this in my experiences. My relationship with these people is tangled. I recently stumbled across a few of them and in response to this they sent another stalking perp with a handler to try and scare me again. These are the same people I can sense when they are near me. They can sense me also, and often try to run off while hiding their face from me. What happens to them when I see their face? It is a strange aspect of my experiences. It seems like I am able to expose them, but to whom?

A lot of this is beginning to unravel for myself and others. When I hear the testimonials of victims I shutter in recognition of what they have to endure. I recall my own experiences and the hell they put me through, but what saddens me the most is that there is a group of people willing to do this to another person. There is someone (something) sitting at the controls and aiming a microwave weapon at them to torture them and to control them. Considering the amount of people reporting some kind of control or torture there must be thousands of people operating this technology. Who would do such a thing? Who would work at a job that tortures people on a daily basis? I never thought that it would be possible for a human being to do such a thing to another human being. The thought sickens me. What state of mind must a person be in to participate in torturing targeted individuals? A very sick mind…

One characteristic I have noticed. Whenever I had been mistaken by one of the minions of the Nameless, to be one of the Nameless, they have offered to help me. I have been helped in stores by people that did not work at the store. It was as if I they were programmed to respond. Women have stood next to me with their heads slightly lowered waiting subserviently to be acknowledged by me. I have run into many store cashiers that had suddenly become strangely confused and disoriented when I am purchasing goods. It makes me wonder if these people are mind controlled slaves for the Nameless. I have often hinted at this sort of thing, but the above evidence presented in the video might be used to create these mindless slaves. This is even a bit too much for even me to want to believe.

I have faith that this sort of thing cannot continue. I believe that consciousness cannot sustain such evil and unchecked malevolence. Karma is a law of consciousness that cannot be ignored or avoided. It is the force of karma that has allowed this information to be disseminated and once more people become aware of this the more these people and their organization will be revealed. Once it is out in the open the people of the world no longer allow it, and better yet consciousness will not be able to sustain such evil.

Watch the video (there are two parts) and visit the site. Tell other people about this strange thing called targeted individuals and gang stalking. Help us spread the word about this tragic era of torture and mind control we have entered unknowingly.

I have been experiencing problems accessing my email associated with xam@i-am-xam.com. Please use this forum to contact me. Even the comments on this blog can be deleted by my gang stalking friends. Please be patient and persistent. Will turn off moderation so comments will post immediately.

I will find other means of being contacted. I will join other forums and start posting conversations here. Let’s find out what they are capable of, shall we.
Not just casual stalking going on with me. Seems like the have some technical assistance from some crafty hackers.
Stay tuned…
If all activity from me ends, the they won. I’ll be helping from the other side. Stay strong.

The Prevention of Ascension Vol. I

If you would like to support this site and my efforts please buy as many copies as you like. I receive a small percentage of the book sale.